“My life on the farm during the Great Depression more nearly resembled farm life of fully 2,000
years ago than farm life today. I have reflected on it often since that time; social eras change at their own curious pace, depending on geography and technology and a host of other factors. It is incredible with what speed those changes have totally transformed both the farming methods and the very life-style I knew in my boyhood.” -Jimmy Carter, 1975

“Our farm was at Archery, about three miles west of Plains, Georgia. Of course, Archery was not incorporated or organized in any way; it was just the name of the rural community and train stop.” – Jimmy Carter, 1975 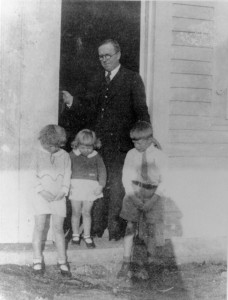 Earl Carter with his children Jimmy, Ruth, and Gloria in front of the store.

The day the Carter family moved to the farm in 1928 was memorable. Earl Carter forgot his house key and had hi 4-year-old son Jimmy crawl through a window to open the front door. The family never remembered the door being locked again. The home has been restored to its appearance, just before electricity was installed in 1938. “When electricity came to the farm,” Jimmy Carter recalled, “an almost unbelievable change took place in our lives.” This farm was home to Jimmy Carter until he departed for college in 1941. The Carters grew peanuts, cotton, and sugar cane as cash crops. They also raised vegetables and livestock on this 360-acre farm.

Farm animals were tended such as cows, guinea hens,

ducks, geese, and pigs. Jimmy also had his own pets to take care of such as dogs, Shetland ponies, and occasional calves and pigs for Future Farmer of America projects. Dogs were constant companions; they were used for playmates and also for hunting squirrels, rabbits, coons, possums, and other small game.

Although chores kept the family busy, there was always time for recreational activities. A
clay tennis court was located between the house and the store. The Carter family was known for its competitive spirit. The girls had a playhouse adjacent to the Carter home. Fishing hunting, reading, playing with homemade toys, and listening to their father’s battery-powered radio were also favorite pastimes.

The Community Around Us

“In the undefined community of Archery, there lived two permanent families who were white, one my own family and the other that of the Seaboard Railroad section foreman. There were usually one or two more transient white families and about twenty-five black families in the community.” – Jimmy Carter, 1975

The town of Plains was for the Carter children the center of commerce, education, and

Jimmy riding his horse Lady Lee alongside his dog, Sam.

religion. During his childhood Jimmy Carter didn’t consider himself part of the Plains society, but always thought of himself as a visitor when he entered what he called that “metropolitan” community. He attended his school and church in town and could even travel to nearby Americus on occasion, but his life was mostly tied to his home in Archery.

Life On The Farm

“My black playmates were the ones who joined me in the field work that was suitable for younger boys. We were the ones who “toted” fresh water to the more adult workers in the field. We mopped the cotton, turned sweet potato and watermelon vines, pruned deformed young watermelons, toted the stove wood, swept the yards, carried slop to the hogs, and gathered eggs – all thankless tasks. But we also rode mules and horses through the woods, jumped out of the barn loft into huge piles of oat straw, wrestled and fought, fished and swam.

The early years of my life on the farm were full and enjoyable, isolated but not lonely. We always had enough to eat, no economic hardship, but no money to waste. We felt close to nature, close to members of our family, and close to God.” – Jimmy Carter, 1975 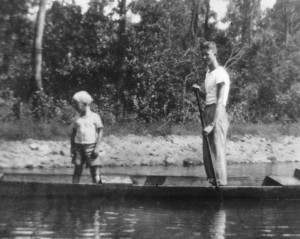 Billy Carter with older brother, Jimmy, fishing in a pond near Americus, Georgia.

It was in this rural setting that Carter grew to adulthood. His enjoyment of and concerns for the environment, his farming expertise, his keen business sense, and his later interest in civil right were developed as he mopped cotton, hunted doves, worked in the fields, raised stock, operated his father’s store on the farm, and interacted with his father’s employees.

Some of the jobs were enjoyable; some were pure drudgery. One of the most unpleasant jobs on the farm was mopping cotton. Boll weevils were a problem during the 1920s. A mixture of arsenic, molasses, and water was used to kill the weevils. Farm workers would dip a mop into the bucket containing the poison mixture and apply a small amount of it into the bud of each cotton plant. The job was given to the boys and Jimmy Carter hated this task. His trousers, legs, and bare feet would become saturated with the syrupy mess. Flies would swarm around him and at night he took off his trousers and stood them in the corner because they were so stiff. Although farm work was hard, most of it was enjoyable. Hauling cotton to the gin or watermelons to the railroad was always exciting. Working in the blacksmith shop on the farm was challenging. Most of their food was raised on the farm. Sweet potatoes were a major part of the family’s diet. Other crops raised were watermelons, corn, black-eyed peas, cabbage, Irish potatoes, pecans, and beans. The hours of work meant days were long on the farm, from sunup until sundown.

Cotton was a primary cash crop in the Plains community, but there was a growing trend toward raising peanuts. Jimmy always remembered his father’s most prominent crop as peanuts. Jimmy Carter was a businessman even as young as five years old when he sold boiled peanuts on the streets of Plains. He would earn about $1.00 per day gross income selling peanuts and on Saturdays he could sell more. He would get up early on Saturday morning and fill up his buckets with choice peanuts. They would be washed and boiled in salt water and then he would rush through his morning farm work. After breakfast Jimmy would walk the railroad tracks to Plains carrying the peanuts in two large baskets. When he got to Plains he sold the peanuts for a nickel a bag. 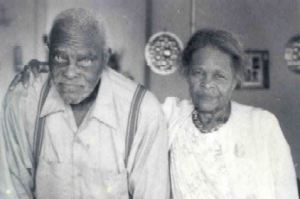 Most Archery residents worked as sharecroppers, tenant farmers, or day laborers on farms. Sharecroppers and tenant farmers, who sometimes paid rent for the property that they farmed, worked the land for a share of the crop. Jack and Rachel Clark were day laborers who lived in a cabin on the Carter farm. They were provided a place to live and earned a salary for their work. Mr. Clark tended mules and rang the cast iron bell to wake the farm workers each morning. He also took care of the barn, the yard, the vegetable garden, and collected wood for the fireplaces in the Carter home. Mrs. Clark was as close to the Carter family as a “second mother” could be. She sometimes worked picking crops and cared for the Carter children when their mother, Lillian Carter, worked as a nurse. Jimmy Carter’s young life was shaped by Rachel Clark who he remembered as being a close companion, confidante, and someone who enhanced his fishing skills.

The impact of the Carter family’s environment during childhood cannot be overestimated.
The location, their family life, their relationships with neighbors, and this place in time each factored into the development of the Carter children. Their upbringing and the things that were important to them guided their formation as adults. Their childhood environment serves as an example of the past guiding the future.

James Earl Carter, Sr. and his family moved into this house in 1928, six years after it had been built by the Plexico family. The house is typical of a middle class rural dwelling in southwestern Georgia during the 1930s. Heating was originally accomplished by fireplaces and wood stoves. Initially, there was no running water and electricity was not available until 1938. This farm was sold by Earl Carter to T. Richard Downer in 1949. The Downer family owned the property until 1994 when it was purchased by the National Park Service. The site now consists of 17.22 acres of the original 360-acre farm which includes the residence and surrounding structures. The site is restored to its appearance before electricity was installed in 1938.