James Earl Carter, Sr., and his family moved into this farmhouse in 1928. The house was heated by fireplaces or wood stoves and did not have running water or electricity until 1938. The Carter family lived in this house until 1949.

Like most boys, Jimmy enjoyed spending much of his time outdoors. His bedroom, however, was the place where he kept many of his collected treasures. Postcards, letters, and souvenirs sent to him by his Uncle Tom Gordy, who was in the Navy, sparked dreams of far away places and a future naval career.

Coming home from school each day, the Carter children first stopped by the black desk which they had nicknamed “Mother.”  Their mother’s nursing career kept her frequently away from home, but she would write down chores for the children and leave their “to do” list on the desk. During the evening, the family gathered around the battery-powered radio following the evening meal to listen to favorite programs, news, and sports events.

Much of the food in this home was produced in the Carter’s fields, garden, pasture, and yard. Cooking and canning using the wood cookstove made food preparation an extensive process. The heat from the woodstove added warmth to the home during the cold winters, but was not welcomed in the hot summers.

Finally getting an indoor bathroom was a big event in the Carter family. No one complained about bathing in the cold shower with the water coming directly from the tank on the windmill. There was a unique showerhead – a bucket with holes in the bottom! An even greater blessing was not having to walk outside and across the yard to go to the outhouse. 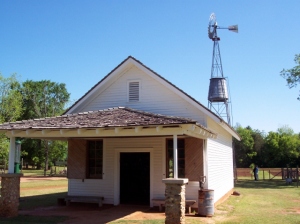 Barns and sheds were an important part of the Carter’s farm. They had storage sheds, a milking barn, a harness shed, a pump shed, and a large barn. The large barn was considered to be the gathering point and life of the farm.

Here you see a windmill like the one installed by Earl Carter in 1935. He ran pipes from the large holding tanks to the farmhouse, and finally they had running water in their home! The country store run by Earl Carter was an important part of the farm and the Archery community. Food items, household goods, and clothing items were sold here. It was too far to travel three miles to Plains during the week, so the people who lived around the Carter’s farm would buy their “goods” here.

Rachel and Jack Clark were a tenant farm family that lived on the Carter’s farm. Both of them were an important part of Jimmy Carter’s childhood. Jack was admired for the hard work he did on the farm.

Rachel was also a hard worker who enjoyed taking young Jimmy to the creeks and streams to go fishing. Some of Jimmy Carter’s most cherished memories of his childhood include the strong sense of family and friendships established while living in Archery.

Take a virtual tour of the boyhood farm.