Jimmy Carter (James Earl Carter, Jr.), thirty-ninth president of the United States, was born October 1, 1924, in the small farming town of Plains, Georgia, and grew up in the nearby community of Archery.  His father, James Earl Carter, Sr., was a farmer and businessman; his mother, Lillian Gordy Carter, a registered nurse.

He was educated in the public school of Plains, attended Georgia Southwestern College and the Georgia Institute of Technology, and received a B.S. degree from the United States Naval Academy in 1946.  In the Navy he became a submariner, serving in both the Atlantic and Pacific fleets and rising to the rank of lieutenant. Chosen by Admiral Hyman Rickover for the nuclear submarine program, he was assigned to Schenectady, New York, where he took graduate work at Union College in reactor technology and nuclear physics, and served as senior officer of the pre-commissioning crew of the Seawolf, the second nuclear submarine.

On July 7, 1946, he married Rosalynn Smith of Plains.  When his father died in 1953, he resigned his naval commission and returned with his family to Georgia.  He took over the Carter farms, and he and Rosalynn operated Carter’s Warehouse, a general-purpose seed and farm supply company in Plains.  He quickly became a leader of the community, serving on county boards supervising education, the hospital authority, and the library.  In 1962 he won election to the Georgia Senate.  He lost his first gubernatorial campaign in 1966, but won the next election, becoming Georgia’s 76th governor on January 12, 1971.  He was the Democratic National Committee campaign chairman for the 1974 congressional and gubernatorial elections.

President Jimmy Carter
On December 12, 1974, he announced his candidacy for president of the United States.  He won his party’s nomination on the first ballot at the 1976 Democratic National Convention, and was elected president on November 2, 1976. 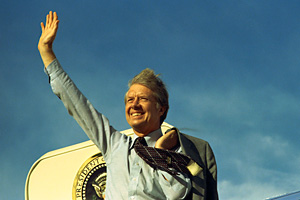 President Carter waves atop the steps of Air Force One before departing to Los Angeles to speak to the United Auto Workers convention on May 17, 1977.

Jimmy Carter served as president from January 20, 1977 to January 20, 1981.  Significant foreign policy accomplishments of his administration included the Panama Canal treaties, the Camp David Accords, the treaty of peace between Egypt and Israel, the SALT II treaty with the Soviet Union, and the establishment of U.S. diplomatic relations with the People’s Republic of China.  He championed human rights throughout the world.  On the domestic side, the administration’s achievements included a comprehensive energy program conducted by a new Department of Energy; deregulation in energy, transportation, communications, and finance; major educational programs under a new Department of Education; and major environmental protection legislation, including the Alaska National Interest Lands Conservation Act.

The Carter Center
In 1982, he became University Distinguished Professor at Emory University in Atlanta, Georgia, and founded The Carter Center.  Actively guided by President Carter, the nonpartisan and nonprofit Center addresses national and international issues of public policy.  Carter Center staff and associates join with President Carter in efforts to resolve conflict, promote democracy, protect human rights, and prevent disease and other afflictions. The Center has spearheaded the international effort to eradicate Guinea worm disease, which is poised to be the second human disease in history to be eradicated.

President and Mrs. Carter volunteer for Habitat for Humanity, a nonprofit that helps people renovate and build homes.

Jimmy and Rosalynn Carter volunteer one week a year for Habitat for Humanity, a nonprofit organization that helps needy people in the United States and in other countries renovate and build homes for themselves.

Since 2007, President Carter also has served as a member of The Elders, a group of independent global leaders.  He teaches Sunday school and is a deacon in the Maranatha Baptist Church of Plains.  For recreation, he enjoys fly-fishing, woodworking, and swimming. The Carters have three sons, one daughter, nine grandsons, three granddaughters, four great-grandsons, and six great-granddaughters.

On December 10, 2002, the Norwegian Nobel Committee awarded the Nobel Peace Prize for 2002 to Mr. Carter “for his decades of untiring effort to find peaceful solutions to international conflicts, to advance democracy and human rights, and to promote economic and social development.”