Contrary to popular opinion, the peanut is not really a nut such as a pecan or walnut. It is actually a close relative of the black-eyed pea, a legume. Legumes are plants in which the roots contain nodules of nitrogen fixing bacteria which return remarkable amounts of nitrogen to the soil. Naturally, the peanut is a perfect crop to rotate in with soil depleting plants like cotton.

Peanuts are pulled out of the ground in rows and dried for harvest season.

Archeologists have discovered that peanuts, native to South America, have been used for thousands of years. However, President Thomas Jefferson and famous botanist, George Washington Carver, played key roles in placing the peanut firmly in the United States. Thomas Jefferson, a botanist himself, contributed to the peanut’s increased popularity when he became the first American president known to grow peanuts. The peanut then began its journey through America during the Civil War where soldiers, both Northern and Southern, subsisted on its rich nutritional components.

The peanut was known throughout the South as a goober pea. The word goober comes from the Congo name for peanuts – nguba. Slaves coming to North America from Africa brought peanuts with them.

Carver, who many consider the father of the peanut industry, encouraged farmers to plant peanuts and was credited with turning peanuts into a major cash crop from 1900-1950. Carver’s strategy for increasing their popularity was his development of more than 300 uses for peanuts, including paper from peanut shells, shaving cream, shoe polish, axle grease, and ink.

The peanut is a delicious protein-packed food. More than 25% of the peanut is pure protein–a higher percentage than the protein content of eggs, milk, meat, or fish. The climate, soil, and long growing season of south Georgia provide excellent growing conditions for this crop.

The peanut is unusual because it flowers above the ground, but fruits below the ground. A common misconception about peanuts is that they grow on trees (like walnuts or pecans) or that they grow as part of a root, like potatoes. Not true!

Peanut seeds (kernels) grow into a green oval-leafed plant about 18 inches tall which develops delicate yellow flowers around the lower portion of the plant. The flowers pollinate themselves and then loose their petals as the fertilized ovary begins to enlarge. The budding ovary grows down away from the plant, forming a small stem, or “peg” which extends into the soil. The peanut embryo is in the tip of the peg, which penetrates the soil. The embryo turns horizontal to the soil surface and begins to mature taking the form of the peanut. From planting to harvesting, the growing cycle takes about four to five months, depending on the variety. Depending on its care, one peanut plant may produce more than 40 peanuts.

Worldwide, the United States is surpassed in peanut production only by China and India. In the U.S., peanuts are cultivated in Georgia, Alabama, Florida, New Mexico, North Carolina, Oklahoma, South Carolina, Texas, and Virginia. Today nearly half of the peanut crop in the U.S. is grown in Georgia.
The four varieties of peanuts grown in the United States are: Runner, Virginia, Spanish and Valencia. Each is used for a different purpose.
Runners have become the dominate type. A high proportion of these are used for peanut butter. Runners grow mainly in Georgia, Alabama, Florida, Texas, and Oklahoma.

Virginians have the larger kernels and account for most of the peanuts roasted and eaten from the shells. When shelled, the larger kernels are sold as salted peanuts. Virginians are grown mainly in southeastern Virginia and northeastern North Carolina.
Spanish type peanuts are used mostly in peanut candy, salted nuts, and peanut butter. They are also used to make oil, because they have a higher oil content than the other types of peanuts. They are primarily grown in Georgia, Oklahoma, and Texas.

Valencias, which are grown in New Mexico, are very sweet peanuts and are usually roasted and sold in the shell. These peanuts are excellent for boiling, a traditional way of eating them in the South.

Methods of peanut planting and harvesting have greatly changed over the years. Specialized machinery now replaces fields full of farm employees doing the work manually. Unlike a pea, the peanut plant produces its pods under the ground. When mature, the plants and their peanuts are harvested in a series of operations.

When the plant has matured and the peanuts are ready to be harvested, the farmer waits until the soil is not too wet or too dry before digging. When conditions are right, he drives his digger up and down the green rows of peanuts. The digger loosens the plant and cuts the tap root. Just behind the blade, a shaker lifts the plant from the soil, gently shakes the dirt from the peanuts, rotates the plant, and lays the plant back down in a “windrow,” peanuts up and leaves down.

Drying is the next important step. When dug, peanuts contain 25 to 50% moisture. Peanuts are generally left in the windrows to dry for 2 or more days in the field for the first part of their drying process.

In the next step, called combining the pods are removed from the vines, cleaned, stemmed, and conveyed into a bulk bin on the combine. The remaining parts of the plant are returned to the soil and later plowed under or are baled as hay.

The last step is called curing. The peanuts are dumped into wagons and cured to 10% moisture with warm air forced up through the perforated floors of the wagons. If the peanuts are to be used for seed, they are treated with chemicals to prevent insects and mold damage and then stored until the next planting season. If they are to be converted to oil, peanut butter, or eaten whole, they are shelled and processed for that product.

Peanut “Roots” in the Carter Family 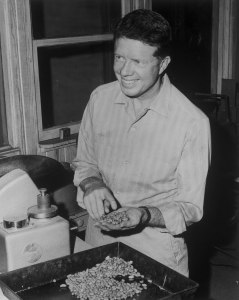 The popularity of and curiosity about the peanut grew significantly during the successful 1976 presidential campaign that put Jimmy Carter in the White House. The image of the peanut in caricature was seen around the world as a symbol of not only a president, but also the towns of Plains. Born in 1924, James Earl Carter, Jr. grew up on his parents’ 360-acre farm. In Carter’s early years, his father began growing peanuts, a crop that made a great impact on his life. His family first raised the small Spanish peanuts, which were used as salted nuts, in candy bars, and some varieties for hog feed. At the age of five, Carter sold boiled peanuts on the streets of Plains.

When Jimmy was growing up on the farm, three acres of land produced a ton of peanuts, generating about sixty dollars in income, which for the time was excellent return. During harvesting season, every able bodied person was needed for the peanut harvest. Of this experience, Carter later wrote:

“The key to peanut harvest was the threshing machine, which we called a ‘picker’ because is picked the nuts from the vines. It was most often driven by a flat belt from the rear axle or wheel of a truck, and the dried stacks were hauled to it on wooden sleds, each pulled by a mule. The nuts were collected in a basket or washtub and dumped into a pickup truck or wagon; the nutritious dried vines were baled for animal feed. This was a big and important operation, and involved all the men on the place.”

When Earl Carter died in 1953, his son, Jimmy, resigned from his career in the U.S. Navy to return to Plains to manage his father’s farm supply business and several hundred acres of land. Jimmy later decided that instead of just buying and reselling certified seed as his father had done in his business, it would be more profitable if he started growing the peanut seed himself. The increased income enabled him to expand the warehouse operation. Carter’s Warehouse not only included sale of certified seed peanuts, but it also included the service of supplying liquid nitrogen, bulk fertilizer and lime. The warehouse also bought corn, provided custom grinding and mixing, and ginned cotton. Fire and casualty insurance were also available through the Carter agri-business.

While he serves as president, Jimmy Carter placed the family farm supply business into the protection of a blind trust before he left for Washington, D.C. in 1977. This trust allowed for a law firm in Atlanta to take full administration of the farm supply business during his years in the White House. The carters felt that relinquishing the business to someone else’s care would separate them from these affairs and avoid the possibility of their financial holdings resembling any conflict of interest while President Carter was in office. Their personal counsel, Charles Kirbo of the Atlanta law firm, was their financial trustee. Following the election loss in 1981, the Carters were informed by Charles Kirbo that because of three years of drought and several changes in warehouse management, they were over $1 million in debt.

As they struggled to recover from the unexpected financial blow, the solution to their problem became evident. The Carters sold the family business and also began writing books, which helped them recover financially.

The Carters have personal land holdings in Sumter and Webster Counties, Georgia. In the past, these lands were used for agriculture and timber production. After their return from the White House, the Carters reassessed their land use. Expanding on their commitment to good land stewardship, the Caters manage their land to be economically productive and to provide for wildlife and recreation. Their land has also become a certified Tree Farm. The Carters not only set a good example, but they also publicly share their views on stewardship, reforestation, conservation, and protection of the environment.

Peanuts are still the mainstay of economy in Plains. This town of about 700 people supports two peanut processing warehouses and celebrates the harvest of the peanut with a hometown celebration, the 4th weekend in September.